The Breakup of Bell and its Impact on Innovation

with Martin Watzinger
Draft coming soon.
In 1984, after a a seven-year lawsuit, the Bell System was broken up, resulting in the largest corporate reorganization in history. The aim was to open up the markets for telecommunications equipment and for long-distance telephone services for competition. In this paper we show that this breakup and the regulatory interventions preceding it had a substantial long-term impact on U.S. innovation. We argue that before the antitrust case, Bell could extend its market power from being the regulated provider of short-distance telephone services to the potentially competitive markets for long-distance services and for telecommunications equipment manufacturing by restricting access to this essential facility, its local network. We discuss how regulation and the breakup changed access to the telecommunications network and why this increased innovation. Our study provides lessons for the evaluation of today’s dominant providers in tech markets. 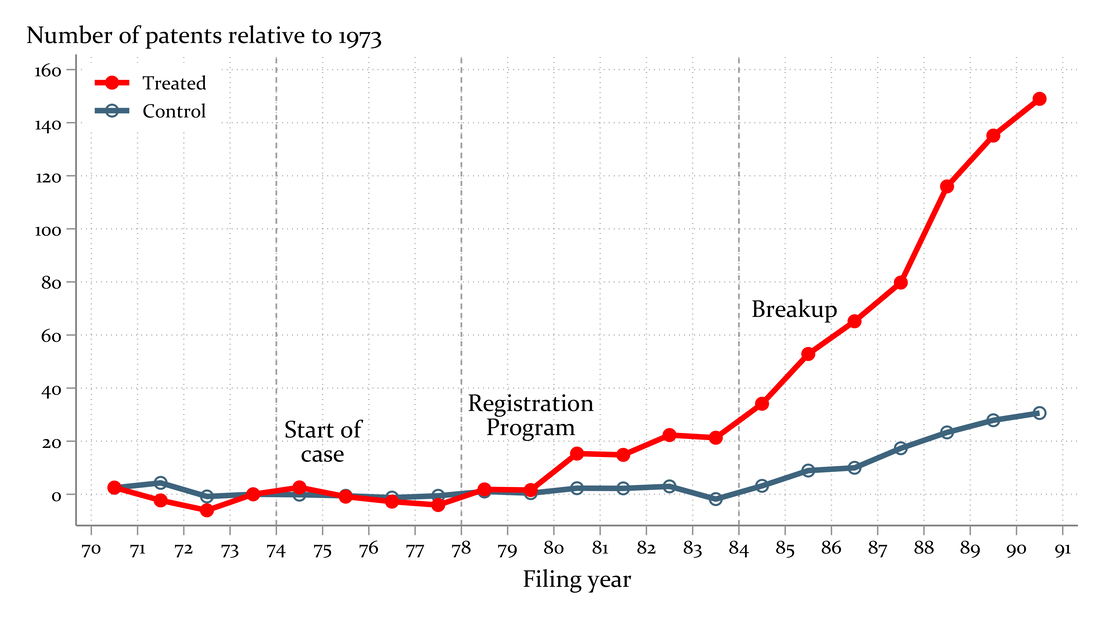 VAT reduction as unconventional fiscal policy in Germany:
Fast but heterogeneous pass-through in the fuel market

with Felix Montag and Alina Sagimuldina
Download / CEPR Discussion Paper / VoxEu
On 3 June 2020, the German government unveiled an unprecedented stimulus package to combat the economic consequences of the COVID-19 pandemic. A key element of this package is a temporary reduction of value-added tax rates between July and December 2020. The aim of this policy is to temporarily lower prices and stimulate consumption through the expectation of higher prices in the future.

Patents on General Purpose Technologies: Evidence from the Diffusion of the Transistor

How do patents influence the spread of General Purpose Technologies (GPT)? To answer this question, we analyze the diffusion of the transistor, one of the most important technologies of our time. After AT&T began licensing the transistor on standardized terms in 1952, the diffusion of the transistor technology and especially cross-technology spillovers increased dramatically. This suggests that patents on GPTs may hinder the positive feedback loop between innovation in upstream and in application sectors, the primary reason why GPTs produce unusually large productivity improvements. Standardized licensing increased innovation and market entry in particular by unrelated inventors in unconcentrated markets. 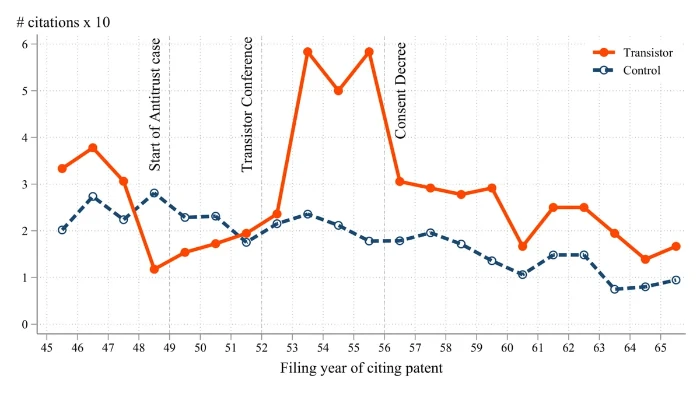 Standing on the shoulders of science

with Martin Watzinger, University of Münster and Josh Krieger, Harvard
HBS working paper / CEPR Discussion Paper / VoxEu  / Patent novelty data / R&R in Strategic Management Journal
Today's innovations rely on scientific discoveries of the past, yet only some corporate R&D builds directly on scientific output. We analyze U.S. patents to establish three new facts about the relationship between science and the value of inventions. First, we show that patents which build directly on science are on average 26% more valuable than patents in the same technology that are disconnected from science. Patents closer to science are also more likely to be in the tails of the value distribution (i.e., greater risk and greater reward). Based on patent text analysis, we next show that patent novelty predicts their value. Finally, we find that science-intensive patents are more novel. Overall, using science appears to help firms capture more value through relatively novel inventions. 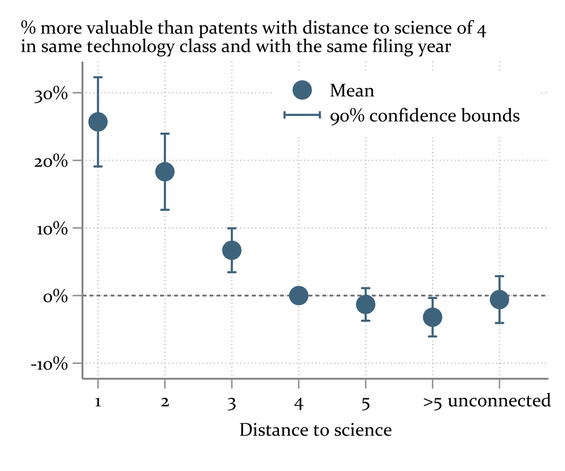 How antitrust can spur innovation: ​Bell Labs and the 1956 consent decree

Is compulsory licensing an effective antitrust remedy to increase innovation? To answer this question, we analyze the 1956 consent decree which settled an antitrust lawsuit against Bell, a vertically integrated monopolist charged with foreclosing the telecommunications equipment market. Bell was forced to license all its existing patents royalty-free, including those not related to telecommunications. We show that this led to a long-lasting increase in innovation but only in markets outside the telecommunications industry. Within telecommunications, where Bell continued to exclude competitors, we find no effect. Compulsory licensing is an effective antitrust remedy only if incumbents cannot foreclose the product markets. 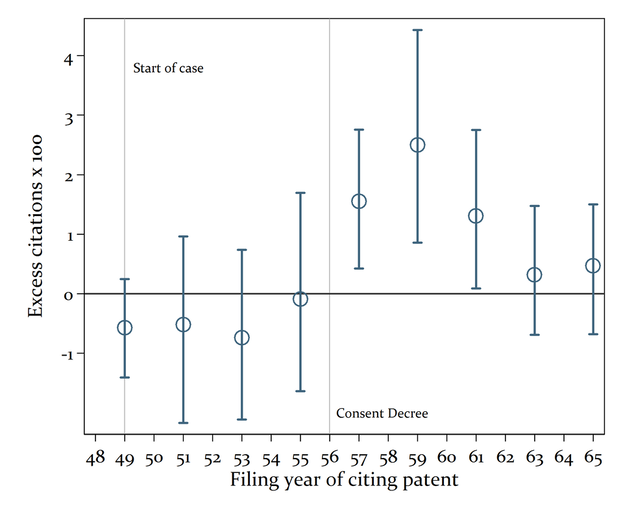 Measuring the Spillovers of Venture Capital

We provide the first measurement of knowledge spillovers from venture capital-financed companies onto the patenting activities of other companies. On average, these spillovers are nine times larger than those generated by the R&D investment of established companies. Spillover effects are larger in complex product industries than in discrete product industries. Start-ups with experienced inventors holding a patent at the time of receiving the first round of investment produce the largest spillovers, indicating that venture capital fosters the commercialization of technologies. Methodologically, we contribute by developing a novel definition of the spillover pool, combining citation-based and technological proximity-based approaches. 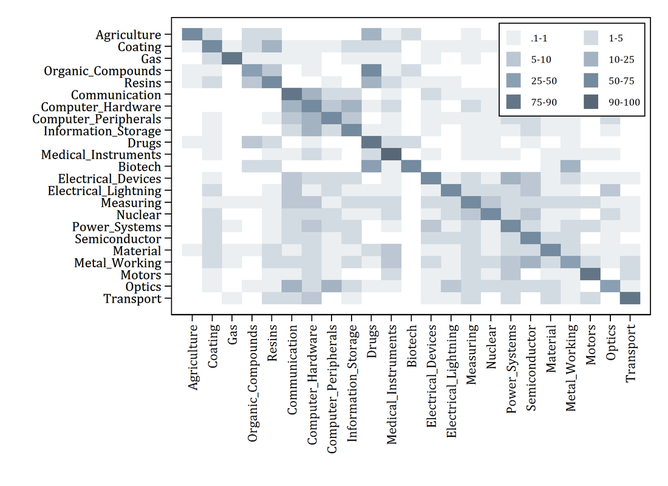 Multinational firms with operations in high-tax countries can benefit the most from reallocating taxable income to tax havens, though this is sufficiently difficult and costly that only 20.4 percent of German multinational firms have any tax haven affiliates. Among German manufacturing firms, a one percentage point higher foreign tax rate is associated with a 0.3 percentage point greater likelihood of owning a tax haven affiliate. This is consistent with tax avoidance incentives, and contrasts with earlier evidence for U.S. firms. The relationship is less strong for firms in service industries, possibly reflecting the difficulty of reallocating taxable service income. 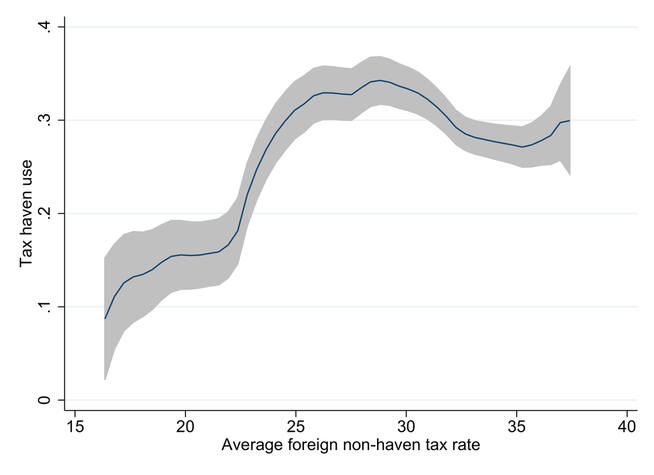 with Franziska Bremus, Claudia Buch and Katheryn Russ
Journal of Money, Credit and Banking, 2018, vol 50(8), 1785-1825
2013, NBER working paper 19093.
Does the mere presence of big banks affect macroeconomic outcomes? In this paper, we develop a theory of granularity (Gabaix, 2011) for the banking sector, introducing Bertrand competition and heterogeneous banks charging variable markups. Using this framework, we show conditions under which idiosyncratic shocks to bank lending can generate aggregate fluctuations in the credit supply when the banking sector is highly concentrated. We empirically assess the relevance of these granular effects in banking using a linked micro-macro dataset of more than 80 countries for the years 1995-2009. The banking sector for many countries is indeed granular, as the right tail of the bank size distribution follows a power law. We then demonstrate granular effects in the banking sector on macroeconomic outcomes. The presence of big banks measured by high market concentration is associated with a positive and significant relationship between bank-level credit growth and aggregate growth of credit or gross domestic product.